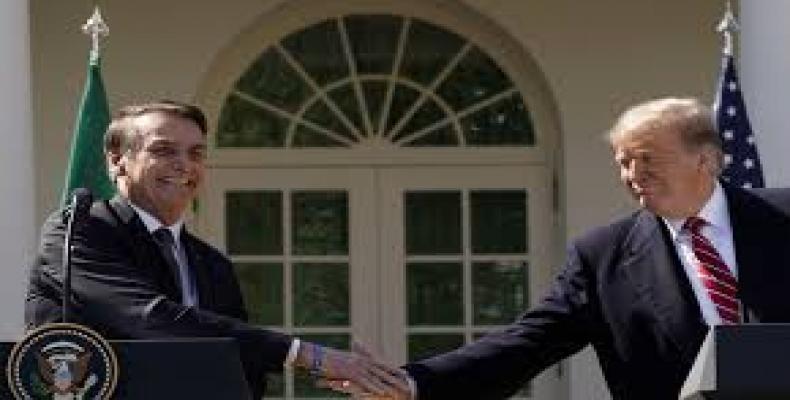 Brasilia, April 12 (RHC)-- Brazilian President Jair Bolsonaro is not making a secret of his plan to bring down Venezuelan President Nicolas Maduro, saying in an interview that he and Washington pin their hopes on a military coup instigated from the outside.

Speaking to Jovem Pan radio, the right-wing Brazilian leader, who has never hidden his deep animosity towards his Venezuelan counterpart, implied that while not intervening outright, both the U.S. and Brazil are working behind the scenes to lay out the grounds for a military revolt that would bring down Maduro.

“It is our intention and that of the Americans that there is a rift in the army, because it is they who still support Maduro.  It is the armed forces that decide whether a country lives in a democracy or in a dictatorship,” Bolsonaro said, adding that he does not see any future for Venezuela in its present state.

The United States, which was the first to recognize the self-proclaimed ‘interim president’ Juan Guaido as the legitimate representative of the Venezuelan people, has been using arm-twisting tactics against Caracas, choking the Venezuelan economy with new debilitating sanctions in a bid to force Maduro out of power.  U.S. officials, including Donald Trump, have repeatedly claimed that they would keep “all options” on the table, not ruling out a military intervention in the Latin American country.

In an interview earlier his week, Bolsonaro appeared to say that he might single-handedly decide if Brazil needs to join a potential U.S.-led military incursion against the Maduro government.  “What can Brazil do? Suppose there is a military invasion there [from the United States].  The decision will be mine, but I will listen to the National Defense Council and then the Parliament,” Bolsonaro pledged.

Back in February, Brazilian Vice President Hamilton Mourão flatly rejected the possibility of Brazil serving as a staging ground for a U.S. invasion.  Mourão argued that, for foreign troops to be stationed in Brazil, Bolsonaro would need to receive a green light from the National Congress, which at present is reluctant to back such a militaristic move.

Since coming to power in Janaury, Bolsonaro -- dubbed ‘Tropical Trump’ at home -- has been cozying up to the United States.  During Bolsonaro’s recent trip to the country, he and Trump exchanged compliments and football jerseys, while marking the birth of a nascent ‘conservative alliance.’

Bolsonaro mirrors Trump’s controversial policy in the Middle East, having made advances towards Israel. In late March, Brazil opened a business office in Jerusalem, which has been referred to as part of an embassy.  Speaking on Monday, Bolsonaro labeled his country’s relationship with Israel “a marriage.”

“It’s like a marriage: you date, you get engaged, then you’re married, that’s in stages,” while pointing out that the U.S. has gone much further down that road.