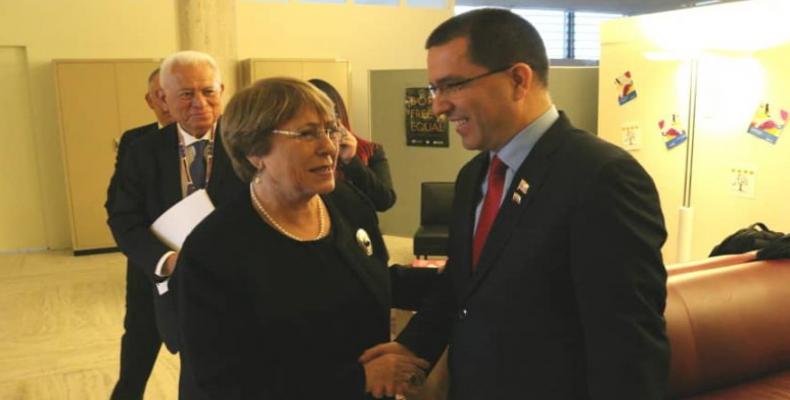 Caracas, June 20 (RHC)-- United Nations High Commissioner for Human Rights Michelle Bachelet arrived in Venezuela following an invitation from Venezuelan President Nicolas Maduro.  Bachelet is in Venezuela as the Bolivarian government deepens cooperation with international organizations such as the Red Cross and the United Nations.

President Nicolas Maduro invited the human rights commissioner in November 2018 and arrived to join five envoys from her office who have already been received by the government.  Venezuelan officials hope the visit will spotlight the effects of the U.S. economic blockade which the Bolivarian government has called a serious violation of the country’s sovereignty and human rights.

The visit comes amid a tense political climate brought about by attempts to overthrow the legitimate Venezuelan government, as well as five years of increasing pressure from a U.S. economic blockade aimed at strangling the economy of the Bolivarian nation.

Figures show that financial losses attributed to the economic war amount to over $24 billion, not counting the $5 billion of public money frozen by international banks.  These steep losses have limited the government's ability to buy medicine and invest in Venezuela’s production sectors.

The South American nation will reportedly make the argument before the human right's czar that U.S. sanctions are a grave violation of human rights directly caused by Washington.  A recent report by economists Mark Weisbrot and Jefferey Sachs showed that 40,000 Venezuelans have died as a result of the economic damage wrought by U.S. sanctions.

Bachelet's visit also comes as the Bolivarian government steps up cooperation with international bodies. Venezuela has recently embarked on projects partnered with the U.N. that would ensure respect for human rights by protecting the most vulnerable members of society from the worst effects of the U.S. economic war.

The country has also been working with the International Red Cross, as well as the governments of China and Russia to deliver humanitarian aid to a people under economic siege. The most recent delivery of 24 tons of medicine and medical equipment was based on a coordinated effort between the government and the aid organization.

As President Maduro welcomes the United Nations High Commission on Human Rights, the country's opposition factions are embroiled in a corruption scandal involving misappropriation of funds from the ‘Venezuela Aid Live” concert and other sources into private bank accounts of senior representatives for National Assembly leader Guaido in the Colombian border town of Cucuta.