Polls in Argentina reveal progressives set for first round victory 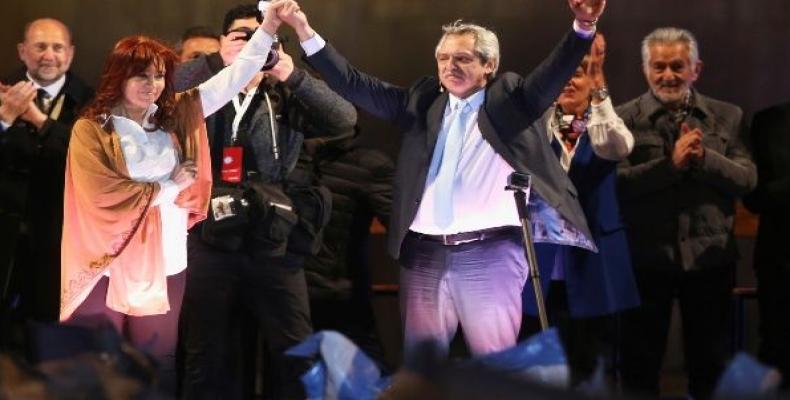 Buenos Aires, September 11 (RHC)-- Alberto Fernandez and his running mate Cristina Fernández de Kirchner of the progressive ‘Front For All’ Party is set for a first round victory in Argentina’s upcoming presidential elections against neoliberal incumbent President Mauricio Macri.  All polls show Fernández-Kirchner ahead with over 50% in the first round at the upcoming October 27th elections.

A new poll published on Monday by Gustavo Córdoba & Asociados, along with at least four other major polling agencies in Argentina, have all given the Fernández​​​​​​​-Kirchener ticket large leads over President Macri in the upcoming elections.  They have polled Fernández​​​​​​​-Kirchner at 50.7 percent  while the incumbent Macri is trailing at 30.1 percent.

These figures show that the progressive Front For All ticket is likely to cruise to victory in the first round. Under Argentinian electoral law, a first round victory requires 45 percent, or 40 percent if the winner is at least 10 points ahead of the closest rival.

The scale of Argentina’s economic crisis has cost President Macri much of his support. Since his government signed a multibillion dollar IMF deal, the country has experienced runaway inflation of over 50%, rising unemployment, and negative growth. Child poverty now stands at nearly 50%, an increase of 11% in just one year.

Fernández​​​​​​​ has railed against the IMF deal and has pledged to leave behind Macri’s neoliberal economic policies. Fernandez also signalled that he would turn away from Argentina’s current foreign policy, questioning the country’s involvement in the so called ‘Lima Group’, founded by right-wing governments in the region to isolate Venezuela on the international stage.