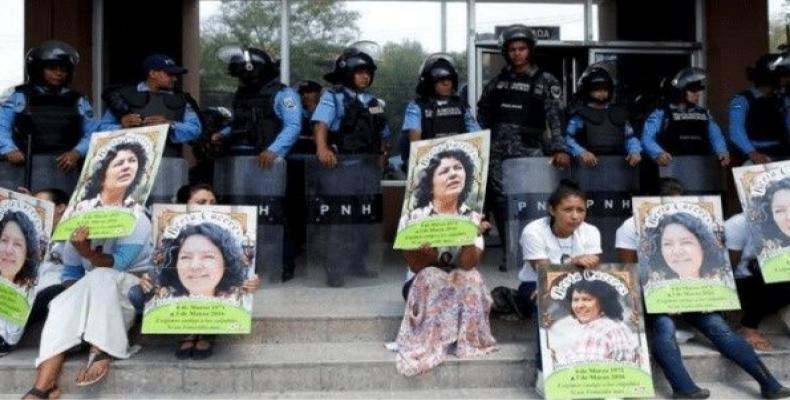 Tegucigalpa, September 27 (RHC)-- In Honduras, the Special Prosecutor's Office for Crimes Against Life in Honduras (Fedcv) confirmed the link between the former president of Empresa Desarrollos Energéticos SA (DESA), David Castillo Mejia, with Geovanny Bustillo, who has been convicted for the murder of late Indigenous leader Berta Caceres.

The Honduran agency said in a statement that there were telephone communications between Castillo and Bustillo including an exchange of text messages and calls, which confirm the homicide plan and subsequent payment for the assassination of the Honduran environmentalist.

The expert examination carried out by Public Ministry of the phone communications determined that those charged with the murder agreed to a sum of 500,000 lempiras -- about $20,000 -- for the death of Cáceres.

On the other hand, the Department of Crimes Against Life of the Technical Agency for Criminal Investigation (ATIC) explained that David Castillo was responsible for establishing logistics and providing supplies for the murder.  The Women's Violent Death Investigation Section, a body attached to the Fedcv, reported that seven persons were found guilty as masterminds behind this homicide.

The investigation and evidence collection began by the Honduran Public Ministry on March 3, 2016, assigned to a multidisciplinary team appointed by attorney general Oscar Fernando Chinchilla.

Berta Caceres -- a 43-year-old Indigenous Lenca, teacher and feminist -- was known for her environmental activism, which had earned her the Goldman Prize the year before she was killed.

In 2010, the Honduran government granted to DESA a 20-year concession on the Gualcarque river, considered sacred by the Lenca.  The company planned to build the Agua Zarca dam, plans against which Caceres led a popular resistance.

After years of defamation and death threats, Caceres was murdered at home by a hitman on March 2, 2016.  Mexican activist Gustavo Castro was also wounded in the attack.