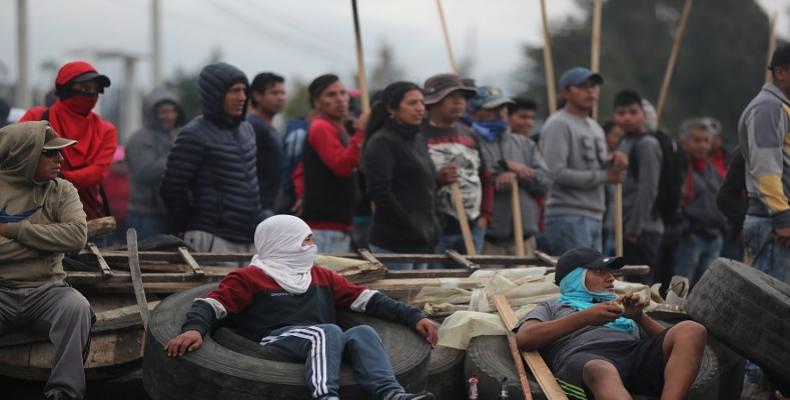 In Quito, the capital city, streets remained empty only a few hours before dawn, while the Indigenous activists slept at college campuses where "solidarity camps" were set up to host them.   For seven days in a row, Ecuadoreans have been protesting against policies seeking fiscal austerity, labor liberalization, dismissal of workers and income reduction.  Unlike what the private media says, the fight is not just against fuel price hikes.
​​​​​
The Ecuadorean government is implementing such policies to comply with conditions from the International Monetary Fund (IMF), an institution that will lend $4.2 billion to this Andean country.  "What the government did is give a prize to the country's big banks and capitalists and, at the same time, a great punishment to the poor," the Workers' United Front (FUT) president Mesia Tatamuez said.   "We call everyone who is against the IMF, which is the other culprit in the economic crisis, to join the nationwide strike."

On Tuesday night, the Moreno administration publicly admitted it had accepted the mediation of the United Nations, the Catholic Church and university authorities to establish an immediate dialogue with Indigenous organizations.  Almost simultaneously with this announcement, however, the Ecuadorean president confirmed he will not eliminate economic measures or resign.

Meanwhile, the Confederation of Indigenous Nationalities of Ecuador (Conaie), which maintains at least 6,000 people protesting in Quito, warned that the Moreno administration is behaving as if it were "a military dictatorship."

“More than 80 people were arrested in Quito and illegally transferred to the Police Intervention and Rescue Group (GIR) facilities,” the Regional Human Rights Advisory Foundation (INREDH) tweeted and presented images of the arrested people lying on their stomachs while police officers watched them.

Former Foreign Minister Ricardo Patiño, to whom Mexico granted asylum due to the political persecution carried out against him during the current government, joined the citrisim against Moreno and saying that he must “repeal economic measures, apologize for his ineptitude,” resign from his position and call on lawmakers to submit their resignations as well.