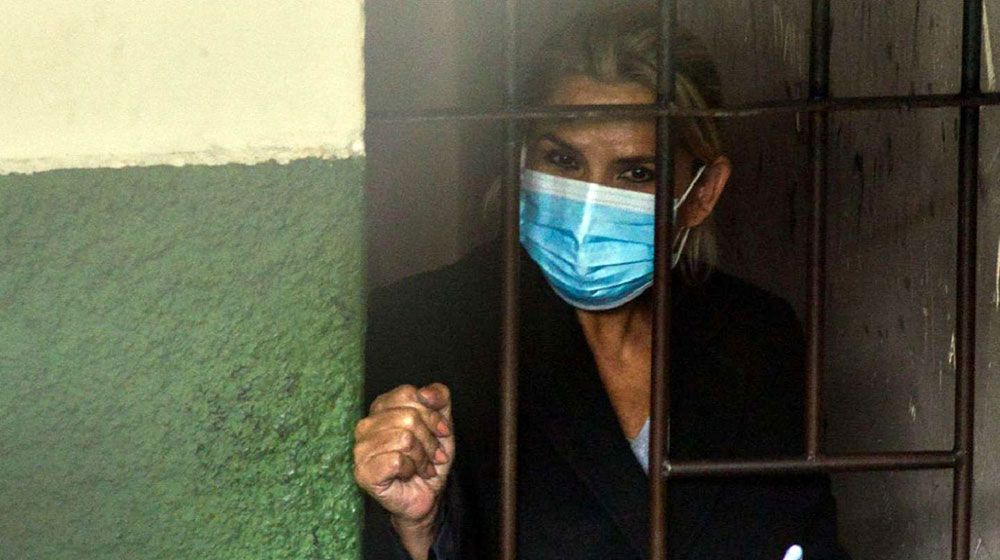 La Paz, August 21 (RHC)-- Bolivia’s former interim president, Jeanine Añez .. who swore herself in as "president" following a coup in November 2019 -- has been charged with genocide and other crimes.  She is being charged over the deaths of 20 people who protested the ousting of the country’s longtime socialist leader, Evo Morales, in 2019.

The charges against Anez, who seized power in Bolivia and ruled for one year, have been “provisionally classified as genocide, serious and minor injury, and injury followed by death,” Attorney General Juan Lanchipa announced on Friday.  According to Bolivian law, the coup leader could face 10 to 20 years in prison if found guilty.

The accusations relate to two rallies in the town of Sacaba near the central Bolivian city of Cochabamba and the town of Senkata in the El Alto area outside the capital, La Paz in November 2019, in which 20 demonstrators were killed and dozens more injured in clashes with security forces.

Earlier this week, a report commissioned by the Organization of American States (OAS) described those events as massacres.   Five independent human rights experts from across Latin America ruled that the military and police, which Añez sent to curb the protests, likely acted with intent to kill as live fire had been employed against pro-Morales demonstrators, “even when people were running away.” This means that their deaths could be considered “summary executions,” the report said.

The OAS report said the interim government came to power by overstepping the constitution and persecuted its opponents with “systematic torture.”   It also called for the “racist violence perpetrated against Indigenous people, including Indigenous women who were especially attacked in this period,” to be recognized and those responsible to be held accountable.

Washington is demanding that Bolivia release Añez and other officials accused of orchestrating the genocidal coup.

Jeanine Añez came to power after longtime leader Evo Morales resigned and was forced into exile after the Bolivian security forces sided with his opponents in the wake of a violent uprising. Demonstrations had been triggered by accusations of election fraud that later turned out to be completely baseless.

Her reactionary right-wing government harshly suppressed the counterprotests of Morales supporters, going as far as giving the military temporary immunity from prosecution over its actions during the rallies.

The unrest saw at least 37 killed across Bolivia and hundreds injured in 2019.  There were scuffles between rival demonstrators, but most of the deaths were caused by police.

Añez was arrested this March on accusations of sedition, terrorism, and conspiracy, and has been held in pre-trail detention since then.  The 54-year-old denied any wrongdoing and accused Bolivian authorities of “abuse and political persecution.”