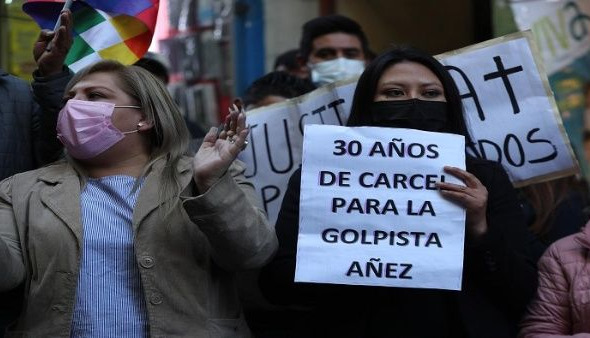 Jeanine Añez was sentenced to 10 years in prison for the Coup d'Etat II case. |

La Paz, June 22 (RHC)-- Four new trials of responsibilities against the former de facto president Jeanine Áñez will be set by the Bolivian government, according to the declarations of Deputy Minister of Justice César Siles.

"By responsibility, by procedure, it is up to us to promote, to achieve that legislative authorization, to then initiate the trial of responsibilities," since such proceedings are in the Legislative Assembly, stated the deputy minister.

One of the accusations against Jeanine Áñez is based on the deaths of the Senkata and Sacaba massacre, where Bolivians are still demanding justice for the victims of the coup d'état.  On October 27, 2021, the Minister of the Presidency, Maria Nela Prada, had reported that the Bolivian Government would carry out a comprehensive reparation plan for the relatives and affected Bolivian citizens in 2019.

The massacres of Sacaba, Senkata and Pedregal occurred in 2019, left a balance of 37 killed, more than 500 injured and 1,800 arrested.

Also included within the charges are the loan from the International Monetary Fund (IMF), the extension of the concession of the trade registry to Fundaempresa and a decree described as a threat against freedom of expression.

Although Jeanine Áñez was sanctioned with 10 years in prison on June 10th, she was only tried in first instance for the Coup d'Etat II Case for the crimes of resolutions contrary to the Bolivian Constitution, and her rise to power in 2019.

The development of the trials of responsibilities must be previously approved with two thirds of the votes (110 out of 166) in the Legislative Assembly.  On the other hand, the declarations of César Siles take place after accepting the suggestion of the UN rapporteur, Diego García-Sayán, regarding a trial of responsibilities for Jeanine Áñez.