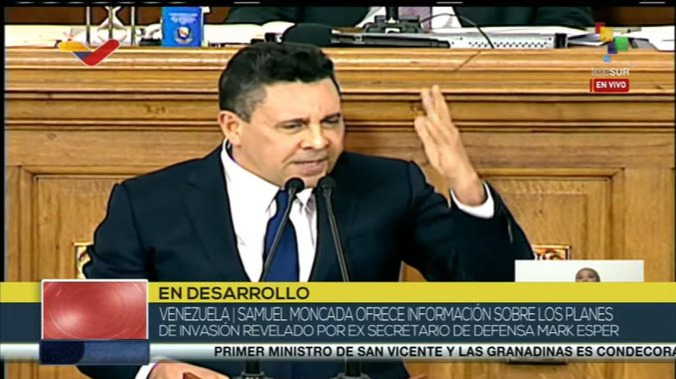 ​Samuel Moncada assured that Venezuela can safeguard its independence thanks to the unity of the people, the civic-military union and the political clarity of its President and his government team. | Photo: VTV​

Caracas, May 26 (RHC)-- The Permanent Ambassador of Venezuela to the United Nations, Samuel Moncada, appeared Thursday before the National Assembly in Caracas and provided new details of the involvement of the U.S. government in plans to destabilize the country and assassinate its constitutional president, Nicolás Maduro Moros.

Moncada explained that never before in its history was Venezuela so close to an armed invasion by the United States, which is not interested in the issue of human rights but in seizing by any means the oil resources that belong to its people.

He recalled that the White House applied an iron policy of unilateral restrictive measures against Venezuela to generalize shortages and thus create conditions for the outbreak of a social conflict.

Moncada analyzed revelations made in his memoirs by former National Security Advisor John Bolton and former Secretary of Defense Mark Esper, both of whom were part of the administration of former President Donald Trump.

He also referred to details of the lawsuit filed before U.S. courts by mercenary Jordan Goudreau, whom representatives of former Deputy Juan Guaidó hired to execute a military incursion (Operation Gideon, May 2020) and assassinate President Nicolás Maduro and other leaders of the Bolivarian Revolution.

These texts confirm that Washington seriously considers the military option to provoke a change of government in the South American nation, and that it was directly involved in the plotting of numerous plans to do so even by violent means.

Among "the cards on the table" referred to by former President Trump to try to intimidate Venezuelans, Moncada also included the options of direct invasion with U.S. mercenaries, Colombians or military forces from other countries, from Colombia or from other territories.

He revealed that in meetings of the Trump Administration, the possibility of perpetrating direct attacks with armies of Latin American nations, a military attack disguised as a humanitarian operation or an anti-drug operation, and attacks by U.S. armed and financed groups within the South American nation were also analyzed.

He added that in those meetings and in the meetings with Guaidó, Leopoldo López and other representatives of the violent right wing it was also considered to apply a total naval blockade against Venezuela and Cuba.

Samuel Moncada assured that Venezuela is facing its second war of independence, and that it can safeguard its sovereign condition with the unity of the people and the Bolivarian National Armed Forces, as well as the political leadership of President Nicolás Maduro and his government team.

Moncada's considerations take place in the context of the investigation that the Venezuelan National Assembly is carrying out into the involvement of the U.S. Government in these plans, for which it created a special commission last May 17th.