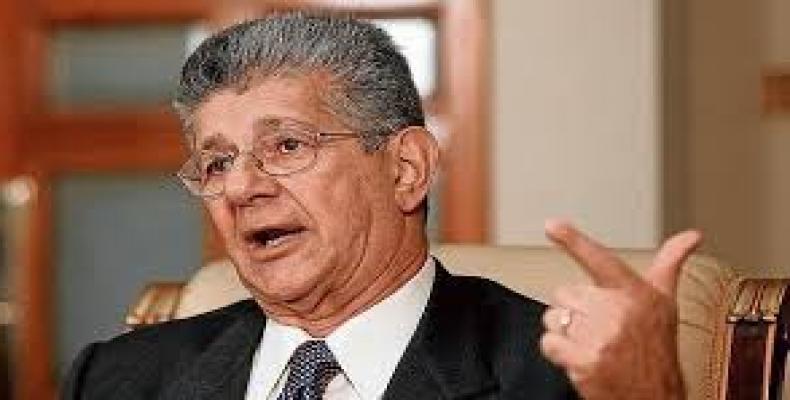 Caracas, May 27 (RHC-teleSUR) -- New evidence has emerged implicating Venezuela’s right-wing National Assembly leader Henry Ramos Allup in recent protest violence, as a suspect in the attack on a police officer admitted to being bribed to kick-start violence in opposition demonstrations aimed at urging authorities to speed up a recall referendum against President Nicolas Maduro.

Romer Moreno, one of the youth protesters caught on tape helping to beat up a cop in opposition marches on May 18, confessed in a video that Ramos Allup’s security chief Angel Coromoto bribed him with between 10,000 and 15,000 Venezuelan bolivars to create violence during the protest.  The country’s monthly minimum wage is 15,051 bolivars.

The protester goes on to explain that Coromoto had previously offered a 2,000 bolivar bribe for the same purpose.  Moreno was reportedly also involved to some extent in the 2013 opposition protests against Maduro’s election that resulted in violence and the death of 43 people.

The leader of the ruling Socialist Party, Diosdado Cabello, characterized the situation as involving “people that have no qualms” who “hire youth to cause harm to other youth.”

Coromoto was detained last week as the suspected mastermind behind recent violence. He was later released.

Ramos Allup has denied that opposition protesters have sparked violence during protests.

Recent demonstrations have been called by conservative opposition leader Henrique Capriles, who lost the election to Maduro in 2013, to put pressure on election authorities to ensure a recall referendum takes place this year to determine whether to remove the president from office. Capriles has made implicit calls for military rebellion as political tensions continue to rise.

The recall referendum has become the centre of political debate in Venezuela. The opposition argues that the authorities are trying to stall the process, while Maduro says people have every right to demand a vote if they wait to go through the proper procedures.