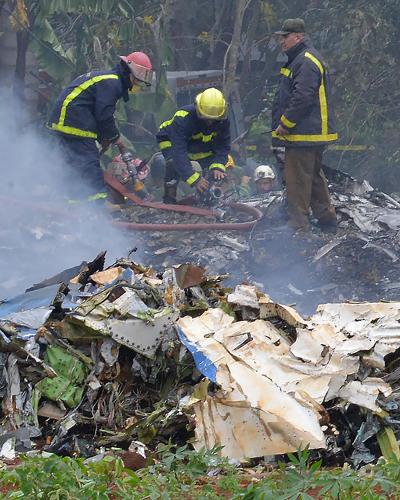 Havana, May 18 (RHC)-- Cuban President Miguel Diaz-Canel expressed his sadness for the tragic plane crash that occurred this Friday at 12:08 (local time), near the Jose Marti International Airport, when a Boeing 737-200 crashed just minutes after taking off.

Díaz-Canel, together with other members of the Government and the Party, immediately arrived at the site, where the Mexican aircraft belonging to the Damojh company and leased by Cubana de Aviación, crashed with 104 passengers on board. The ill-fated Flight DMJ 0972 was en route to the eastern Cuban province of Holguin.

In statements to Cuban Television, Díaz-Canel conveyed his heart-felt condolences to relatives of the victims.

He said that the authorities' response was swift, noting that in a very short time, senior authorities and specialized personnel from the country's ministries of public health, the interior, transport, the fire department, forensics, as well as national and provincial political leaders arrived at the site of the air disaster.

Díaz-Canel added that all the actions in the national plan for this type of disaster have been duly, properly taken. The remains of the victims are being identified and a commission from the country's interior ministry has been created to conduct a thorough investigation into the tragic incident.

He confirmed that there was no damage to any civilian center or house near the area where the aircraft crashed, and stressed that local residents rushed to the disaster area to cooperate with the rescue actions.