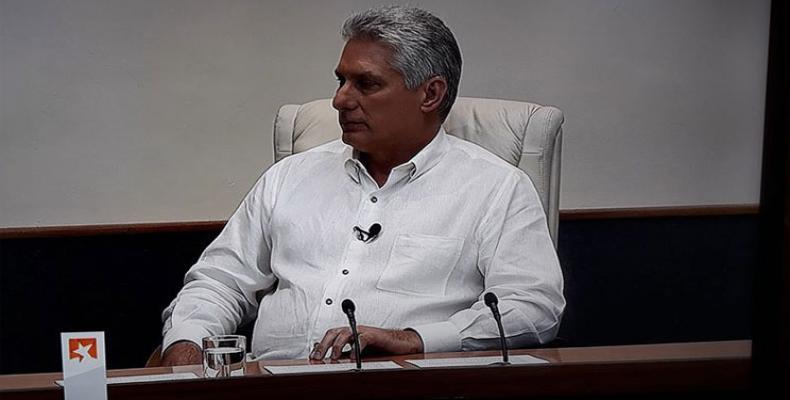 President Miguel Díaz-Canel was the first to speak. He again sent condolences, on behalf of the government and the people, to the families of those killed by the tornado.

He went on to explain that within minutes of the passage of the tornado, firefighters, the police and leaders of the Ministry of the Interior and Civil Defense, health workers and most importantly, the people themselves converged on the area and began to assist victims. The Cuban president stressed that the view was that of a war-zone.

The first meeting of the Council of Ministers took place in the early morning hours of Monday, January 28th at 6:00 a.m.. He emphasized that the swift response prevented further loss of human lives, since there were people trapped under the rubble of collapsed buildings and homes and inside overturned buses and vehicles.

The strategy from the very beginning, said Díaz-Canel, has been, first of all, to protect human lives, assist victims, evacuate those affected, assess the damage and start the recovery work.

General Ramón Pardo Guerra, Civil Defense chief, explained that the traditional torchlight march, which Cubans hold every year on January 27th, on the eve of a new anniversary of the birth of our national hero José Martí, had been postponed due to the forecast of bad weather, and that it was not until a little after 8:00 p.m. on Sunday that the tornado had formed and was quickly traveling, hitting several Havana municipalities.

He said that within minutes, the Civil Defense began to receive reports of traffic accidents, the downing of trees, and the collapse of buildings and houses.

In roughly seven days, said the Civil Defense chief, 90% of all basic services in the affected areas had been restored, while those who lost their homes were accommodated in temporary shelters where they are provided all the necessary services.

Minister of Health Dr. José Ángel Portal Miranda reported that a total of 19 health facilities sustained damage, most of them in the municipality of Diez de Octubre. He explained that the maternity hospital Hijas de Galicia, was the hardest hit, while a number of polyclinics and family-doctors’ offices were also affected.

He pointed out that despite the severe damage, by February 20th, all the affected health facilities should be up and running.

The Cuban health minister highlighted the swift response of rescue teams, health workers, doctors, nurses, technicians, the Cuban Red Cross, and the more than 5,000 medical students, whose efforts have been instrumental in assisting the victims, as well as in the evacuation of newborn babies and pregnant women from the Hijas de Galicia maternal hospital, even those who were in the intensive care unit.

Out of the 195 people wounded by the tornado, only 18 remain hospitalized, five of them in critical condition, while the devastating storm claimed six lives.

He added that out of the 196 patients, pregnant women and newborns evacuated from the Hijas de Galicia maternity hospital to other hospitals, 38 remain hospitalized. Anti-vector and other preventive actions have been stepped up to prevent epidemic outbreaks.

Minister of Domestic Trade Betsy Díaz Velázquez spoke about supply and distribution of canned food, eggs, agricultural products, and other basic items to residents in the affected areas at significantly lower prices. The domestic trade ministry, she said, is also in charge of distributing construction materials and water tanks.

Minister of Energy and Mining Raul Garcia Barreiro said that by January 28, within 24 hours of the tornado, teams of engineers and technicians from Cuba’s Unión Eléctrica had already toured the affected areas and were assessing the damage and implementing the necessary measures to prevent further loss of human life.

The minister of telecommunications reported that all services, landlines, cellphones and WiFi areas were seriously affected, particularly in the municipality of Diez de Octubre. Thanks to the coordinated effort of the sector’s workers, including teams from other provinces, from Ciego de Ávila to Pinar del Rio, nearly 100% of all affected services, including radio communications, have been restored.

René Mesa, Minister of Construction, explained that a total of 4,812 houses were damaged, 505 of them were total collapses. He said that the State will take care of building new homes for those who lost theirs, while more than 900 families, whose houses suffered other damage, have already received construction materials to repair them.

Meanwhile, Reinaldo García, government president in Havana, spoke about donations received for the victims, as gestures of solidarity from Cubans on the island and people around the world.

He explained that authorities have set up 28 points to collect donations, which are organized to help those who need it most. He thanked Cubans and friends of Cuba all over the world for the countless demonstrations of solidarity with the tornado victims.

Raúl Alejandro Palmero, president of the Federation of University Students (FEU), spoke about the support of students in recovery efforts.

The youth leader explained that more than 10 thousand students have been involved, visiting and accompanying those affected by the tornado, collecting and distributing donations, cleaning the streets and repairing family homes. “These are the same students who marched alongside our government leaders in homage to our National Hero José Martí,” he said.

At the end of the special TV program, Cuban President Miguel Díaz-Canel spoke about the slander campaigns against Cuba in the mainstream media. He emphasized that the enemies of Cuba and our Revolution are trying to divide us, discrediting every effort toward full recovery. He stressed that the recovery works will continue for as long as necessary and that, as always, no one will be left behind. He thanked all those who inside and outside of Cuba have showed their solidarity with the victims and the Cuban people in general.