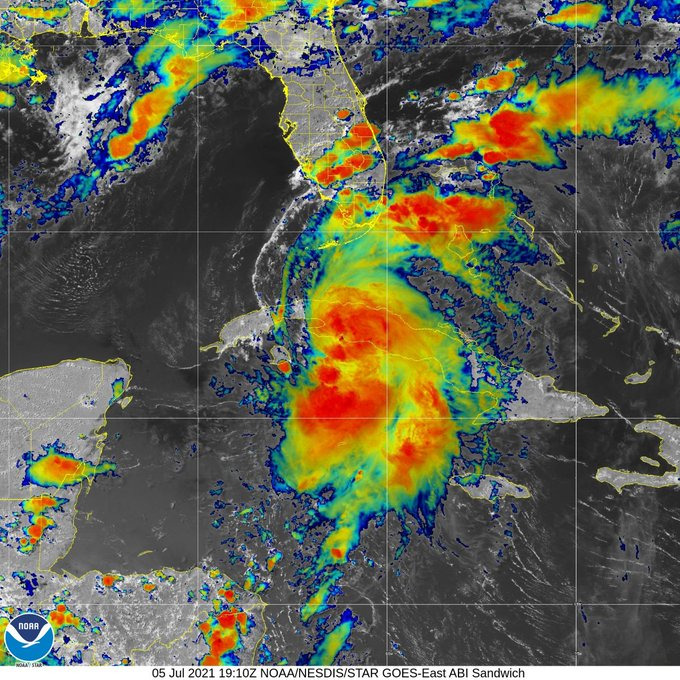 Havana, July 5 (RHC)-- Tropical Storm Elsa made landfall near Cuba’s Playa Giron in the province of Matanzas, on its south-central coast, bringing “flooding rains” to the island before it is expected to move toward the Florida Straits.

At 2:36 pm, the National Civil Defense tweeted the event.  The eastern provinces from Guantanamo to Ciego de Avila were instructed to return to normal condition as of 11:00 am local time.

Authorities had evacuated 180,000 people as a precaution against the possibility of heavy flooding from a storm that already battered several Caribbean islands, killing at least three people.
“We continue with maximum attention focused on the track of storm Elsa through Cuba,” Cuban President Miguel Diaz-Canel tweeted. “Authorities are working all over the country.”
A tropical Storm warning is in effect for Sancti Spiritus, Cienfuegos, Matanzas, Villa Clara, Mayabeque, Havana, and Artemisa provinces.

In Havana, the city’s Provincial Defense Council (CDP) told residents that while “the winds will not be strong … there may be heavy rainfall with danger for vulnerable homes and buildings”.

Municipal workers had been on the streets for several days clearing storm drains, and brigades were assembled in case of landslides.
The meteorological event will begin to affect the capital from the night and early morning, with tropical storm winds (60-75 km/h). According to the expert, its exit to the sea should occur between Mayabeque and the eastern region of Artemisa, and swells are expected in coastal areas.

The storm killed one person in St. Lucia, according to the Caribbean Disaster Emergency Management Agency. According to a statement from the Emergency Operations Center, a 15-year-old boy and a 75-year-old woman died Saturday in separate events in the Dominican Republic after walls collapsed on them.

Elsa was a Category 1 hurricane until Saturday morning, causing widespread damage on several eastern Caribbean islands Friday as the first hurricane of the Atlantic. Among the hardest hit was Barbados, where more than 1,100 people reported damaged houses, including 62 homes that collapsed.