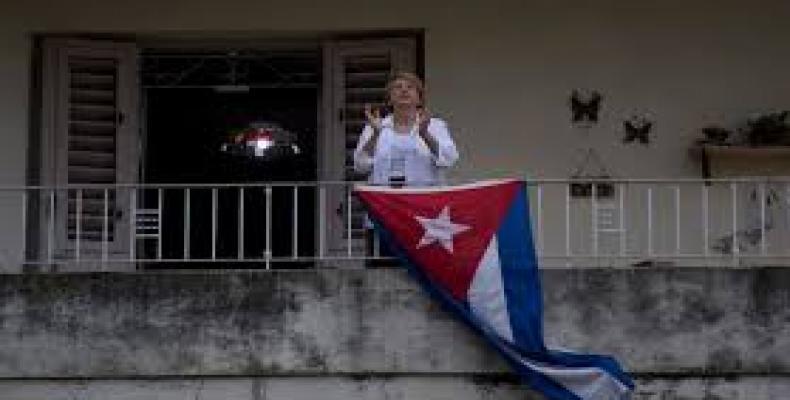 In today’s “This week in Cuba,” we review, first, indications that the cycle of confirmed Covid-19 cases may have reached a high plateau; secondly, the Cuban President’s message of thanks to the Cuban people; thirdly, an explosion of cultural creativity in Cuba in the context of Covid-19; fourthly, confirmation of the effectiveness of the Cuban drug Interferon Alfa 2B; and fifthly, a Cuban columnist warns of post-Covid-19 efforts by the powerful to deceive the people.

At La Mesa Redonda evening television program of April 27, Dr. José Ángel Portal Miranda, Minister of Public Health, explained the mathematical model that has been developed by a team of specialists headed by Dr. Raúl Ginovar, Dean of the Faculty of Mathematics and Computer Sciences of the University of Havana. Portal Miranda explained the concept of active infected cases, which consists of the total number of confirmed Covid-19 cases minus those who have died minus those who have been discharged from the hospital. The mathematical model develops projected curves, showing the number of active infected cases for the 120-day period following the first Cuban case of March 11. Three curves are presented showing favorable, medium, and critical scenarios. The favorable curve shows a projected 100-day cycle with a peak at 50 days and with 1000 active cases at the peak.

To date, the results are slightly better than the favorable projected curve. Even though the 50-day peak had not been reached, the number of new cases began reach a plateau, and the number of active cases began to fall slightly, near the 800 mark. This is good news, Portal Miranda observed, but we have to continue diligently following all the measures, or the results will change direction toward the critical scenario.

The Minister also observed that Cuba has a low number of serious cases, in comparison to other countries, with 7.9% of the confirmed cases having arrived to be serious. Many countries have had 15% to 20%. And 3.9% of the cases have arrived to be critical in Cuba, which also is comparatively low.

The fatality rate in Cuba among confirmed cases is 4%. Some 82% of those who have died were more than sixty years of age, and 41% were more than 80 years of age. Many had previous health problems. These figures also are comparatively low. Cuban specialists see these deaths as Covid-19 related, but not necessarily as directly caused by the virus. For the most part, the previous health problem was actually the cause of death, with a crisis situation provoked by the Covid-19 disease.

The comparatively low number of critical and serious cases and deaths of Covid-19 infected patients is a result of active inquiries that Cuba conducts, in which university medical students, with the support of mass organizations, identify suspicious cases, often on the bases of some contact with confirmed cases. As a result, Cuba has attained a higher percentage of asymptomatic cases under observation; nearly 46% of the confirmed cases have been asymptomatic, with a majority during the last couple of weeks. This enables early identification of symptoms and early treatment. Moreover, Cuban treatments are carried out by medical teams with the support of researchers, and the team can count on an effective procedure that utilizes four different medicines in different phases in the evolution of the infirmity, including the Interferon Alfa 2B compound, a Cuban drug that is used to treat Covid-19 in other countries.

As of Friday, May 1, Cuba has 778 active hospitalized cases, with 767 in stable condition, 4 in critical condition, and 7 in serious condition. The number of active cases has declined somewhat during the past week, indicating that the cycle has reached its high plateau. Of the 1611 confirmed cases since March 11, 778 are active hospitalized cases, 66 have died, 765 have been discharged from the hospital, and 2 have been evacuated to their countries.

(2) Cuba President Miguel Díaz-Canel thanks the people of Cuba

Cuba celebrated International Workers’ Day in a different form, including caravans in some provinces greeted by persons in the street maintaining social distance, the display of flags from doors and balconies, and a contest of artwork and photos on the theme of this year’s May Day, “My house is my plaza,” referring to the fact that this year there were not mass marches in public plazas.

On May 1, a message from Cuban President Miguel Díaz-Canel appeared in the Cuban daily newspaper Granma. He wrote, “We give thanks to all those have given everything of themselves, those tireless conquerors of fear; to those that are disciplined and isolating themselves; and to those who are leading us to the light in the tunnel of darkness and challenges, the light of victory, which always have been lit for those who struggle not merely for one day, nor one month, nor one year, but every day, every month, and all the years.”

(3) Minister of Culture speaks of an explosion of creativity

On the Mesa Redonda program of April 30, Alpidio Alonso, Minister of Culture, declared that Cuban culture has been present during the Covid-19 epidemic. There has been an explosion of creativity, utilizing, among other strategies, videos via social media. We are speaking here of creativity, not cleverness, that is, creativity in support of certain values, calling the people to compliance with the health measures and to support of the Revolution, and expressing and demonstrating solidarity with the people. We are going to win this battle, the Minister declared.

(4) Effectiveness of Interferon Alfa 2B compound is confirmed

The Ministry of Public Health has reported that the Cuban drug Interferon Alfa 2B is showing positive results in the treatment of Covid-19 in Cuba, according to analysis of data up to April 14. Some 93.4% of sick carriers of the virus were treated with Heberón, the commercial name for the Interferon Alfa 2B compound. Among those treated with Heberón, 5.5% arrived to a serious condition, compared to 15% or 20% worldwide. In addition, the rate of death for Covid-19 cases in Cuba not treated with Heberón during the period analyzed was 2.7%, significantly higher than the 0.9% death rate of those treated with the drug. In the world as a whole, the death rate during the period was greater than 6%.

(5) In the post-Covid-19 world, beware of attempts to deceive the people

In the April 29 issue of the Cuban daily newspaper Granma, an editorial by Fernando Buen Abad Domíngez expresses concern that following the Covid-19 crisis, there will be a competition for semantic hegemony responding to a global consensus concerning the need for change, and in this context, powerful global interests will propose “a new order” which is not in reality a new order but a euphemism for deceiving the peoples. To avoid being deceived, we must have a clear agenda that is firmly rooted in objective and subjective realities. “The only truly new is Socialism, a community organized by itself in order to place human wellbeing as the supreme social interest in the creation of an egalitarian inclusive and diverse society. The only new is the emancipation of the oppressed, assuming its role as the transforming direction of the society.” That is to say, the necessary road for humanity is the construction of societies in which political power is in the hands of the delegates and deputies of the people, who direct the society in accordance with the interests of the people in human wellbeing.