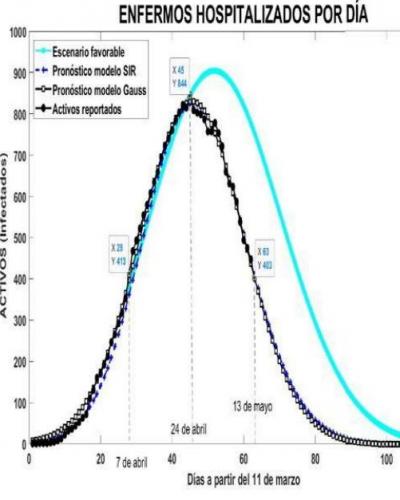 In today’s “This week in Cuba,” we review, first, the continuing favorable movement of the Cuban Covid-19 cycle; secondly, the continuing call of the Cuban leadership that the people continue disciplined compliance with the health measures, in order to avoid a second wave; thirdly, the Cuban fabrication of medicines for the treatment of COVID-19 patients; fourthly, the beginning of the study of SARS-CoV-2 in the Cuban population; fifthly, an article in the Cuban daily newspaper Granma, noting a manifesto by prominent personalities of the world that calls for a change in social and economic structures; and finally, a commemoration of May 11, 1959, when Fidel crossed the Rubicon.

The key to the Cuban containment of the virus has been testing, isolating confirmed cases, identifying the contacts of the confirmed cases, and active inquiries in search of symptomatic and asymptomatic cases, all of which has had the cooperation of the people. The active inquiries are house-to-house investigations conducted by medical students with the support of neighborhood organizations, which have reached more than 4,544,000 persons (roughly 40% of the population). Approximately half of the confirmed cases have been asymptomatic at the moment of the testing.

There have been 44 events of local transmission, in which a number of confirmed cases appear in a particular area or institution. The communities and institutions identified have been placed under measures of strict vigilance and medical attention. Twenty-four of these events have been closed, as a result of completing fifteen days without a newly confirmed case.

On May 11, at the daily press conference on COVID-19, Dr. Francisco Duran, Director of Epidemiology of the Ministry of Public Health, showed graphs comparing the comportment of Covid-19 in Cuba with Iraq and Azerbaijan. Cuba, Iraq, and Azerbaijan have had similar curves, including a descent in newly confirmed cases beginning more or less on the 50th day. However, Iraq and Azerbaijan have experienced a new wave of confirmed cases, beginning ten days ago, at approximately day 60, where Cuba presently is. So the next days are critical, to see if Cuba will be able to maintain the downward movement; the health measures, he said, must be maintained.

Dr. José Ángel Portal Miranda, Minister of Public Health, stated on the evening television/radio news program La Mesa Redonda on Wednesday that various countries have reached sixty days of the Covid-19 epidemic, with a rise and fall cycle similar to Cuba, only to find that there is a second wave that surpasses the capacity of the health system, as a result of a premature relaxing of the health measures. He appealed to the people to maintain compliance with the health measures, and especially important are frequent hand washing and social isolation. The current downward movement of cases does not mean that we can dismantle the health measures, he insisted.

(3) Cuba fabricates medicines for the treatment of COVID-19 patients

The Granma daily newspaper reports that since 2008, the National Center for Biopreparation (BioCen) has been fabricating Biomodulina T, registered in 1994 for the treatment of respiratory infections in adults 60 years of age, and now commercialized by the Cuban pharmaceutical company BioCubaFarma. It is effective in restoring the immune systems of patients who have experienced deterioration of the immune system due to age. Since April 3, it has been included in the treatment procedures of COVID-19 patients, and it also is being used for prevention of the disease, for its capacity to strengthen the immune system.

Granma also reported that Cuba and China have agreed to accelerate a previously agreed joint project involving the research, development, production, and commercialization of Cuban pharmaceutical products, with the intention of distributing medicines in China and the Association of Southeast Asian Nations. The products will be fabricated in the Development Zone of Fangchenggang in China.

(4) Cuba begins study of Covid-19 prevalence in the Cuban population.

Cuba began this past week a study of the presence of antibodies and the prevalence of Covid-19 in the Cuban population, in order to determine the level of immunity of the population. The study also seeks to identify risk factors for persons that have been infected with the SARS-CoV-2 virus. The study will be based on a representative sample of the Cuban population. Some 4000 persons proceeding from 260 health areas of the country have been randomly selected for the study. The study will be able to detect asymptomatic positive COVID-19 cases in the presumably healthy sectors of the population. It will utilize a new testing method based on the internationally recognized Cuban technology SUMA (the letter for Ultra-Microanalytic System in Spanish). Like the so-called rapid tests that are used internationally, the SUMA technique recognizes the presence of antibodies that are generated by the new coronavirus when it invades a human organism.

The May 11 issue of Granma reported that more than 200 personalities of culture and science in the world have issued a manifesto that calls for a change of the social and economic system. As against returning to normality following the pandemic, the manifesto calls for a refoundation of universal human objectives and values, with greater attention to the collapse of the global environment and to increasing social inequality. The manifesto denounced the consumerism that leads to a denial of life itself. Among the signatories were Penelope Cruz, Cate Blanchett, Robert de Niro, and Madonna.

(6) When Fidel crossed the Rubicon

Sunday, May 17, marks the 61st anniversary of the Cuban Agrarian Reform Law of 1959, which nationalized extensive agricultural lands owned by U.S. agricultural companies and Cuban large landholders and distributed them to peasants in the form of small-scale property, cooperatives, and state farms. In commemoration of the event, an article by Juan Antonio Borrego, entitled “When Fidel crossed the Rubicon,” appeared in the Granma. The article begins with reference to the Cuban painter Carlos Henrique, who in the 1930s created a portrait of a peasant family, with a lost look in their hut, suffering from hunger and parasites; the painter gave the work the sarcastic title, Happy Peasants. Borrego notes that in his 1953 self-defense in court, later known as History Will Absolve Me, Fidel denounced the fact that the Cuban agricultural worker was “deceived by governments and forgotten by the leaders of all the national sectors.” Borrego summarizes a study carried out by the Association of Catholic Universities in 1956-1957, which found that 90% of peasant huts lacked electricity, 63% lacked a latrine, and 60% were made of wood with dirt floors; the study also found that the great majority of peasants did not own the land they worked.

Borrego concludes with the observation that it was Raúl Castro who first used the metaphor of the crossing of the Rubicon for the Agrarian Reform Law, “alluding to the repercussions of what was the first great nationalization of the Cuban revolutionary process, a point of rupture that also is considered as the greatest act of social justice for the unhappy peasants that Carlos Henrique had painted twenty years before.”