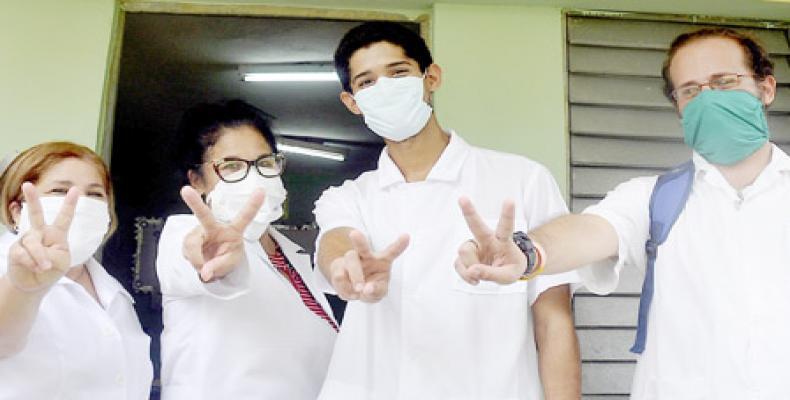 In today’s “This week in Cuba,” we review, first, the leveling of Covid-19 cases, after a thirty-day period of steady decline; secondly, projections for a second mild wave of Covid-19 cases in November; and thirdly, the publication in the daily newspaper Granma of a series of articles on the History of the Coronavirus.

It is believed that the reason for the leveling is that the people have become overconfident, and some are not following the measures. Non-compliance with the measures has contributed to local transmission events, which have been contained, but they have affected the overall trajectory. The government and the Ministry of Health continue to be consistent in calling the people to discipline, maintaining that the measures cannot be relaxed at this time. They insist that the battle will be won, but it is not yet won.

The total number of confirmed cases in Cuba as of May 30 is 2,045; 1,809 have been discharged, 82 have died, and two have been evacuated to their countries.

Dr. Raúl Guinovart Díaz is Dean of the Faculty of Mathematics of the University of Havana and head of a team of Cuban specialists that have been developing mathematical models and have been advising the Cuban government. He projects a second wave of active cases in Cuba in November. The second wave will be far less intense than the first, reaching at its peak 285 active cases, in contrast to the peak of 847 active cases on April 24. It is expected that the present wave will continue to decline to near zero, but a second wave is likely, because it is projected that 0.4% of the of the population will have been infected by Covid-19, while 70% will be vulnerable to infection. It is normal for pandemics to pass to an endemic stage, in which the initial outbreak is followed by subsequent waves, with each new wave less intense that the previous.

Dr. Guinovart allowed for the possibility that the number of cases will fall to zero and will not encounter subsequent waves, but he considered it unlikely. Due to the fact that fifty percent of the confirmed cases are asymptomatic, it would be unlikely that the disease could be effectively stamped out. On the other hand, it is equally unlikely that Cuba will experience a second wave that is more intense than the first outbreak, as is likely to occur in many countries in which necessary health measures have not been consistently applied.

(3) The history of the coronavirus

During this past week, there appeared in the Granma daily newspaper a series of articles on the history of the coronavirus. It reports that in 1899, the Dutch microbiologist Martinus Beijerinck proposed that there exist entities smaller than bacteria, which he called virus, from the Latin word, meaning toxic or poisonous. In 1931, with the invention of the electronic microscope, the German engineers Ernst Ruska and Max Knoll took the first images of a virus. During the course of the twentieth century, scientists developed techniques for isolating viruses. However, their investigations left many viruses undetected; only about 35% of persons with the common cold had a virus that scientists were able to identify. Viruses are not living organisms, because they lack the cells necessary to reproduce, and they need the cells of a host in order to reproduce.

Since 1965, seven viruses have been discovered that are known as coronaviruses, because their surface appears similar to the external layer of the sun, called corona. The first two cause only light symptoms. The coronavirus named 229E was discovered by Dorothy Hamre, a researcher at the University of Chicago, in 1965. The coronavirus OC43 was discovered by Dr. McIntosh, a researcher at the Medical School of Harvard University in 1967. The third and fourth coronaviruses, HKU1 and NL63, cause light to moderate symptoms; they were discovered in Hong Kong in 2005 and Holland in 2004. The fifth, sixth, and seventh coronaviruses cause serious symptoms. SARS-COV-1 began in China in 2003 and later extended to 29 countries; it infected 8,096 persons and caused 774 deaths. MERS-COV was identified in the Middle East in 2012; it infected 2,494 persons, resulting in 858 deaths. And SARS-COV-2, the virus that causes COVID-19, was identified in China in 2019.

The new coronavirus is able to change with relative ease. Three variants have been found. Type A has been found in patients in Wuhan, China and in the United States and Australia. Type B, the dominant type in Wuhan, has not been found much beyond that region. Type C is the variant found in Europe, Singapore, Hong Kong, and South Korea.

Efforts were made to develop vaccines for SARS-COV-1 and MERS-COV. However, when these epidemics were contained, the vaccine research ceased. For many, these early coronavirus epidemics were clear warnings of the dangers of the coronavirus, but there was not an immediate market for a vaccine for these contained viruses, so research did not proceed. If research on the vaccines had continued, the world would have been much better prepared for the COVID-19 pandemic.