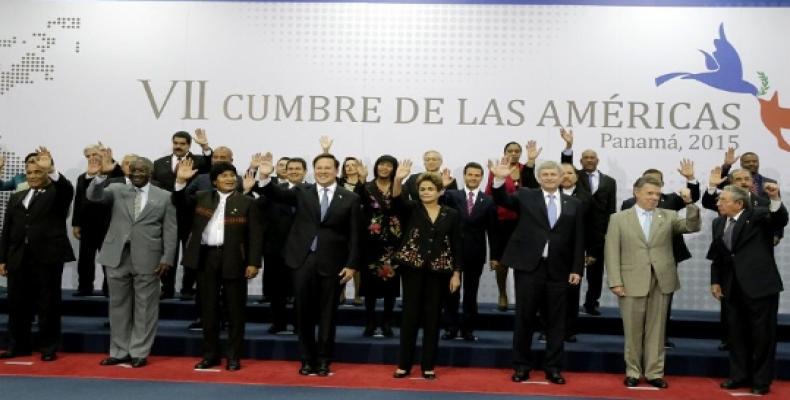 Cuban President Raul Castro and Canadian Prime Minister Stephen Harper held a bilateral meeting, however Canadian media reported that they were only informed of the meeting after the fact and only because the Canadian head of government made a passing reference to a meeting between the two leaders. A photo of the meeting was not released by the prime minister's office, nor were any statements released, suggesting that the prime minister was seeking to deliberately downplay the meeting.

Canada and Cuba have a long-standing political and economic relationship, although Canada supported past efforts by the United States to exclude Cuba from summits.

2. U.S. Refuses to Repeal Sanctions against Venezuela, Despite Pleas from Regional Leaders

Latin American leaders have been unanimous in their condemnation of Obama's executive order, with many touching the topic during their interventions at the Summit of the Americas. Obama and Venezuelan President Nicolas Maduro, who brought the signatures of over 11 million Venezuelans opposed to the decree, held a formal meeting which was described as “cordial” by Maduro. However, no announcement regarding the executive order was made after their meeting.

3. Summit Fails to Issue Final Declaration Due to U.S. Opposition

The Summit of the Americas once again failed to issue a final declaration, as is common during summits that gather heads of state and government.

Bolivian President Evo Morales blamed the United States government for the lack of a final declaration, as did Argentine Foreign Minister Hector Timerman. Both the U.S. and Canada opposed clauses in the draft document that made references to the strengthening of collective rights, as well as those that called on states to have greater obligations. This is the third summit in a row that failed to issue a final declaration.

Anticipating a barrage of criticism, U.S. President Barack Obama walked out of the room where the region's leaders were giving remarks. Argentine President Cristina Fernandez criticized the U.S. leader for issuing unilateral sanctions against Venezuela, calling them “ridiculous.”

It was later reported that Obama left the plenary in order to hold a bilateral meeting with Colombian President Juan Manuel Santos, despite the fact that protocol establishes that bilateral meetings be held once the heads of state and government have all spoken.

With many regional leaders using their time to remark on the history of U.S. interference in the internal affairs in nearly all of the countries of the hemisphere, the U.S. president made a tongue-in-cheek comment about the “history lessons” he always receives in these summits.

Ecuadorean President Rafael Correa criticized Obama's position, saying that U.S. interference was not a thing of the past. “Unfortunately, the executive order against Venezuela, or the request for funds from the Senate to interfere in Ecuador and other countries, are not things from the past, they are things from the present,” said Correa.