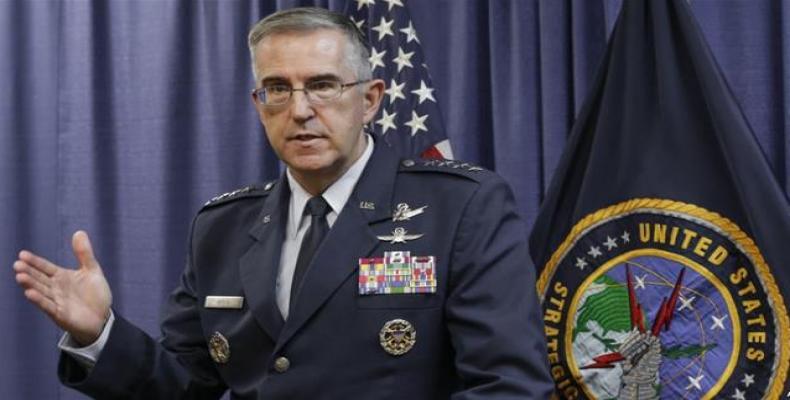 Washington, November 22 (RHC)-- A top nuclear commander in the United States says he would resist an “illegal” nuclear attack order from President Donald Trump.  The head of U.S. Strategic Command, General John Hyten, told an audience at a security forum that he would tell Trump he couldn’t carry out an illegal strike, CBS News reported.

"I provide advice to the president, he will tell me what to do," Hyten said.  "And if it's illegal, guess what's going to happen?  I'm going to say, 'Mr. President, that's illegal.'”   “And guess what he's going to do?  He's going to say, 'What would be legal?’  And we'll come [with] up options, with a mix of capabilities to respond to whatever the situation is, and that's the way it works. It's not that complicated,” he explained.

General Hyten, who is responsible for overseeing the U.S. nuclear arsenal, said that running through scenarios of how to react in the event of an illegal order is standard practice.  The commander’s remarks follow a series of threats made by Trump against North Korea over Pyongyang’s nuclear and missile programs.

Back in August, Trump  threatened Pyongyang with “fire and the fury like the world has never seen,” and later renewed the threat at the United Nations General Assembly, saying: “The United States has great strength and patience, but if it is forced to defend itself or its allies, we will have no choice but to totally destroy North Korea.”