Four months later, Cuba does not neglect its battle against COVID-19 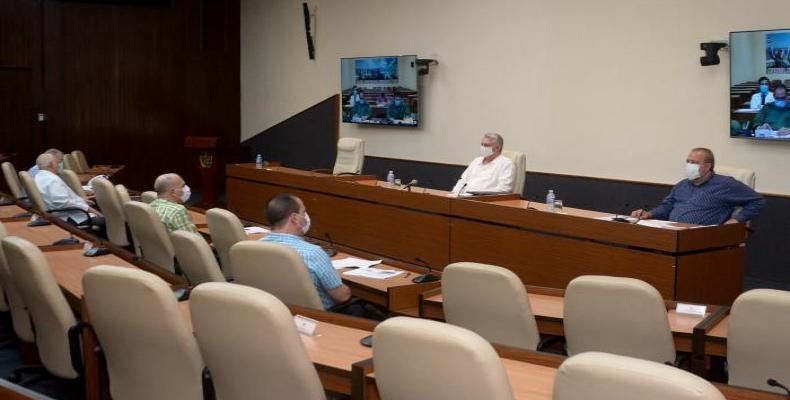 Havana, July 12 (RHC)-- The temporary working group for the prevention and control of the new coronavirus, headed by the President of the Republic, Miguel Díaz-Canel and the Prime Minister, Manuel Marrero, continued this Saturday the analysis of the epidemiological situation in Havana and the progress of the second phase of recovery in Matanzas and Ciego de Ávila.

Four months after the first positive patients were diagnosed in the country for COVID-19, the Cuban government continues to work to save lives and to cut off sources of transmission of this disease, which has caused the death of more than 500,000 people in the world, 87 of them across the island.

This is not the time to afford any neglect.  It was agreed that this Saturday, during the daily meeting of the temporary working group, the importance of maintaining strict compliance with each of the measures, regardless of the stage of recovery of one or another territory.

Although the most complex situation is in Havana, and the largest number of PCR tests are carried out there every day, hundreds of samples from the different provinces are analyzed daily, after the search for new cases that may remain asymptomatic.  According to Public Health Minister José Angel Portal Miranda, at the end of the last day, 3,339 tests were carried out for COVID-19, of which seven were positive, for a cumulative total of 2,420 since the beginning of the epidemic.

With those new figures, he said that this Saturday there were 77 active cases, most of which were admitted to Havana province; 75 of them showed a stable clinical evolution.  With five new discharges reported, there are 2,254 people who have been saved from the disease.

Given the situation in several of its municipalities, the capital continues to receive the greatest attention. According to the Deputy Governor of Havana, Yanet Hernández Pérez, in the last few days measures have been reinforced to prevent new outbreaks of the disease in vulnerable areas and the implementation of PCR tests, rapid tests and active research on the population has been intensified, mainly in the popular councils of the municipalities of Centro Habana, Cerro, San Miguel, Cotorro, Diez de Octubre and Arroyo Naranjo, which are currently being attended to in a differentiated manner.

Among other measures applied by the Provincial Defense Council with the purpose of containing the number of infections, Hernández Pérez explained that the movement has been limited to people in the most complex blocks, where close surveillance is maintained over the family nuclei. In addition, the use of the nasobuco is required, both inside and outside the homes; frequent hand washing; and the provision of footpaths.