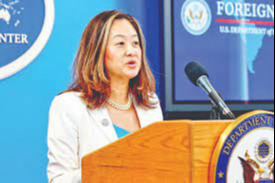 Washington, July 20 (RHC)-- The U.S. government today keeps its policy of double standards towards Cuba by urging other nations to take sides against the island while ignoring the international community's call to eliminate the blockade.

Prensa Latina news agency reported that on Monday, Acting Undersecretary of State for Western Hemisphere Affairs, Julie Chung urged on Twitter other nations to stand against the Cuban government.

According to the official, a 'growing number of countries are calling for respect for human rights on the island, although she does not show evidence of such affirmation.

The news agency noted that although the U.S. official now pretends to listen to the international community, less than a month ago, she ignored the request of 184 countries to end the economic blockade against the Caribbean island.

Last June 23, the U.N. General Assembly approved for the 29th time a resolution calling for the end of the unilateral siege against the Antillean nation, intensified with 243 measures imposed by Donald Trump's administration.

The Cuban government assures that this policy is the main obstacle to its development, affecting more than nine billion dollars between April 2019 and December 2020, which causes suffering and shortages to families.