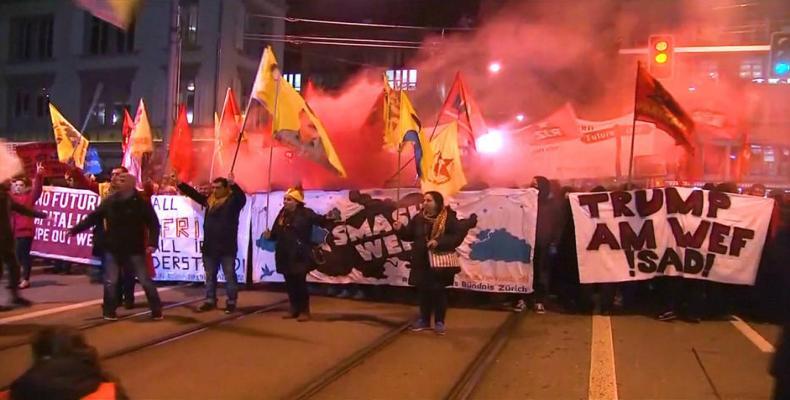 Zurich, January 24 (RHC)-- Thousands of protesters marched through Zurich on Tuesday and other major Swiss cities to demonstrate against a visit by U.S. President Donald Trump to the World Economic Forum's annual meeting this week.

Donald Trump is due to speak on Friday at the WEF meeting in the Alpine town of Davos, an annual meeting of global business and political leaders where protests have been banned.  Similar protests took place, with several hundred protesters each, in public squares in Geneva, Lausanne and Fribourg.

The change of plans was confirmed Tuesday to reporters by East Wing communications director Stephanie Grisham, who had said a week earlier that she would be partaking at the event in a show of support for President Donald Trump.

Trump's personal lawyer Michael Cohen reportedly brokered a payment to adult industry actress Stormy Daniels ahead of the latest round of the presidential election, in October 2016, to make sure she will not leak the affair to the press.

Ever since the news broke out last week, the wife of the 45th U.S. president has been silent except for a pair of tweets that do not mention her husband, Donald Trump.