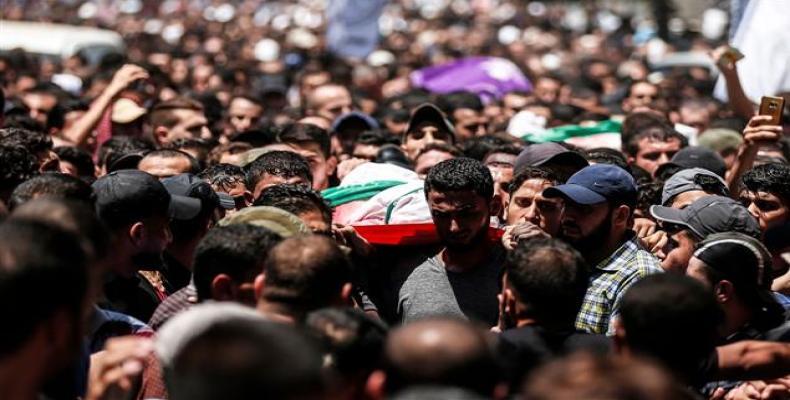 Gaza City, August 9 (RHC)-- Armed Israeli drones and F-16 warplanes have pounded an agricultural area in the northern Gaza city of Beit Lahiya as clashes between Palestinian resistance forces and the Israeli military continue.  The barrage of airstrikes and artillery shelling overnight killed three people, including a Palestinian woman and her 18-month-old child.

The attacks took place near al-Waha, located west of Beit Lahiya.  Israeli media claimed the airstrikes were in response to the launching of rockets that had hit various parts of the occupied Palestinian lands.

Israeli tanks fired shells at Palestinian resistance movement Hamas' posts in northern Gaza after shots were reportedly fired from the other sides of the border.  Meanwhile, Palestinian incendiary balloons caused at least 11 fires near Israeli facilities.

Israel carries out regular attacks on Palestinians in Gaza under the pretext of hitting Hamas targets.  The Gaza Strip has been under an inhumane Israeli siege since 2007 and witnessed three wars since 2008.

Tensions have been running high near the Gaza border since March 30, which marked the start of a series of protests, dubbed “The Great March of Return,” demanding the right to return for those driven out of their homeland.

Nearly 160 Palestinians have been killed and some 17,500 others wounded in the fresh wave of violence, according to the latest figures released by the Palestinian Health Ministry.