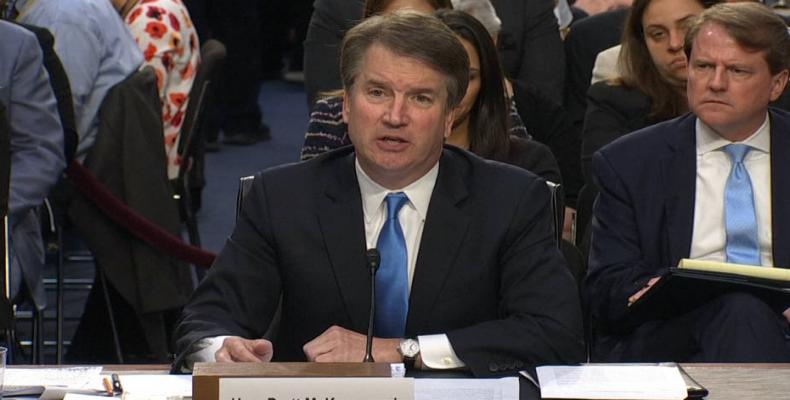 Washington, September 7 (RHC)-- In the U.S., on Capitol Hill, Judge Brett Kavanaugh's Supreme Court confirmation hearing continues before the U.S. Senate.  Earlier, Kavanaugh was questioned for the first time by members of the Senate Judiciary Committee.  He faced inquiries on gun control and acknowledged he has said some semi-automatic rifles cannot be banned.

Judge Kavanaugh declined to promise he would not vote to reverse Roe v. Wade, the 1973 Supreme Court decision which legalized abortion.  He also faced questions over his expansive views on presidential powers -- including the prospects of future criminal charges against President Donald Trump.

Over the course of the week, Kavanaugh's confirmation hearing has been repeatedly interrupted by protesters -- 66 of whom stood up one-by-one to denounce his judicial record before being arrested by Capitol Police.  Seven others were arrested at protests elsewhere on Capitol Hill.  Some of those arrested wore red robes and white hoods evoking Margaret Atwood's dystopian novel, "The Handmaid's Tale," where women are forced into sexual slavery.

This followed 70 similar arrests as the confirmation hearing got underway Tuesday.  Speaking to the Daily Caller website, President Donald Trump suggested such protests ought to be illegal.  Trump said: "I think it's embarrassing for the country to allow protesters.  You don't even know what side the protesters are on."