Venezuelan Armed Forces on alert at the border with Colombia 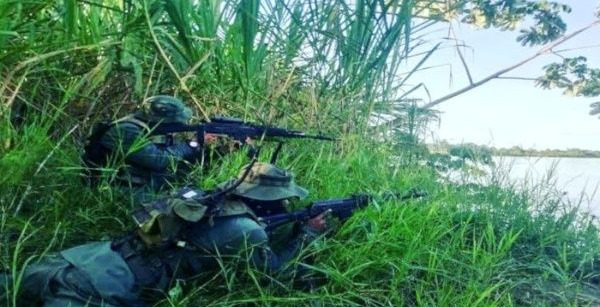 Padrino López: "The Republic makes legitimate use of its weapons to expel groups that crave our territory for bastard purposes." | Photo: Twitter @Libertad020

Caracas, April 4 (RHC)-- The Strategic Operational Command of the Bolivarian National Armed Forces (FANB) remains on high alert on the Colombian-Venezuelan border, scenes of armed clashes over the past several days.

The military command reported that it maintains control of the towns of La Victoria and Ripial, main scenarios of hostilities.  The FANB continues to be deployed guaranteeing peace, tranquility and constant patrolling in the communities of La Victoria, El Ripial and neighboring areas in the state of Apure.

"The armed groups, who generate terror among the people, cowardly flee from Venezuelan justice.   "They will not go far.  We will capture them all!," states a message from the Strategic Command on the social network Twitter.