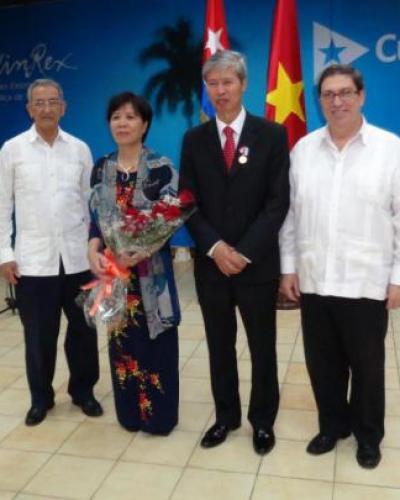 Havana, December 10 (RHC)- The Cuban government presented Vietnamese outgoing Ambassador Duong Minh with the Friendship Medal, in recognition of his tireless efforts to broaden and strengthen political, cooperation and trade relations between the Asian country and the Caribbean state.

The ceremony took place Friday at the Cuban Foreign Ministry. Cuban Deputy Foreign Minister Rogelio Sierra stressed the countless high-level exchanges between authorities from both country's in the period that ambassador Duong served as the head of his country's diplomatic mission in Cuba, including the 2014 visit to Cuba by then Prime Minister of Vietnam Nguyen Tan Dung, the visit in 2015 of then President Truong Tan Sang and more recently, the visit here last November of President Tran Dai Quang.

In accepting the recognition, the Vietnamese diplomat said it was an expression of the historical friendship bonds between Vietnam and Cuba.