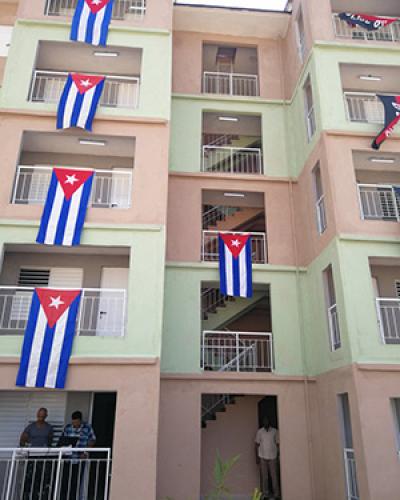 Havana, February 23 (RHC)-- Cuban President Miguel Díaz-Canel witnessed Saturday how ten families who lost all their belongings with the devastating tornado of January 27 were given new homes in the Roble-Hata community in the municipality of Guanabacoa.

The Cuban head of government also met tornado victims in Regla municipality and participated in an event to acknowledge representatives of various state agencies deeply involved in relief and reconstruction efforts.

In Regla, the tornado caused the total destruction of 123 houses and 14 houses have already been given to families

Regarding the partial destruction of some 1,000 houses in Regla, Diaz-Canel said that almost all of them have received construction materials for their reconstruction.

The Cuban president toured some of the locations severely impacted by the natural phenomenon to assess the level of recovery, and he participated in the reopening of the Hijas de Galicia Maternity Hospital,

Earlier in the week he urged all forces involved in the reconstruction not to lose the pace, and he added that after the constitutional referendum, it is necessary to continue working with the same intensity until all problems are solved.

He reiterated that the humanist essence of the Revolution is not to leave anyone abandoned.