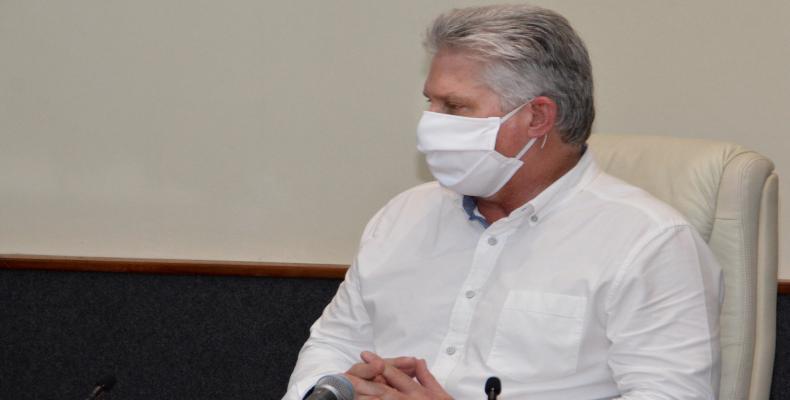 Havana, March 28 (RHC)--Cuban President Miguel Díaz-Canel asked the population to avoid unnecessary outings this weekend to prevent the spread of the COVID-19 through social isolation.

If we demand discipline, control, and good behavior and repudiate indiscipline, we can successfully confront the COVID-19, said the president on national television.

During the Council of Ministers meeting on Friday to coordinate actions to address the situation of COVID-19 on the island, Diaz-Canel said that the conditions were being created by the health system to increase screening this weekend.

"These two days, we can increase the tests and detect more cases of contagion to act quickly," the Cuban president said.

The head of state acknowledged that the majority of the population supports the measures taken, recognizes the role of health personnel, and urged people to comply with the measures adopted.

At another moment of the meeting, the president conveyed the gratitude of the first Cuban patient to recover from the illness,  Jesús Álvarez from Villa Clara province,  who said he always trusted the doctors who attended him.

Díaz-Canel warned that Cuba continues to be besieged and under the U.S. blockade and that, therefore, financial problems have worsened in the current scenario.

That is why, he added, the shortage of supplies is now compounded by anxiety-buying, and warned that authorities would not allow people's hoarding of products for resale.

Cuban health authorities reported that as of Friday, the total number of confirmed cases of SARS-Cov-2 virus disease reached 80 and that  four people had recovered.