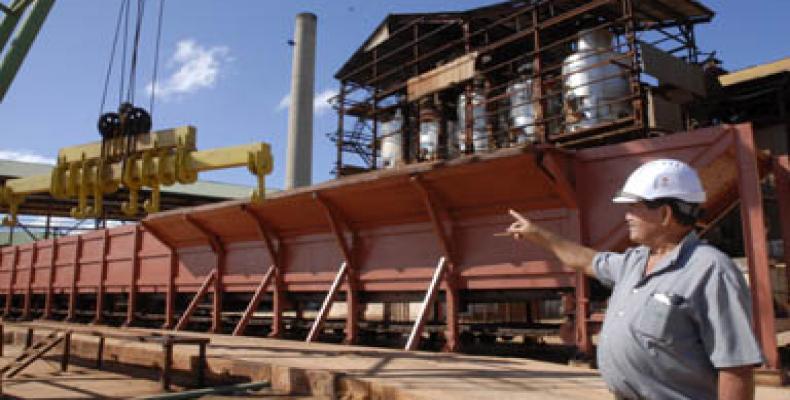 The consolidation and institutionalization of the Revolution

Having declared its socialist character and having taking decisive steps to sever neocolonial dependency with the United States and establish the definitive sovereignty of the nation, the Cuban Revolution in the early 1960s embarked on a plan for the industrial development of the nation. The plan encountered serious obstacles. The country lacked sufficient financial capacity to develop many of the industrial projects with sufficient force, and in this aspect, the U.S. rejection of Fidel’s 1960 proposal for cooperation was a critical factor. In addition, Cuba lacked a sufficient level of technological culture or technicians or a culture of business organization. These limitations could only partially be overcome through relations with the Soviet Union and the socialist bloc.

Given the obstacles that industrialization confronted, the revolution embarked during the period 1966 to 1970 on a strategy of obtaining the necessary capital for industrial development through expansion of sugar production. Accordingly, in 1964 agreements were signed with the Soviet Union for annual purchases of five million tons of sugar. Agreements were also made with other countries of the European socialist bloc and with China. These agreements led to the establishment in 1970 of a goal of a ten-million-ton sugar crop. In order to accomplish the goal, new fertilizers and new varieties were introduced, and investments were made to modernize the sugar industry. As a result of difficulties in the modernization, millions of Cubans were mobilized to cut the sugar cane. As a result of these efforts, a record crop was attained. But it was short of the ten-million-ton goal, and the mobilization of workers from other sectors had had caused problems in these sectors. Fidel announced the results of the sugar harvest to be a lost battle, assuming personal responsibility for the failure

Although the Revolution’s hopes for industrial development were not attained, the 1970s and the 1980s was a period of political stability, made possible by, first, the weakening of the counterrevolution, given its evident failure to destroy the revolution; and secondly, an improvement in the relations between Cuba and the Soviet Union. The integration of Cuba into the socialist bloc included arrangements favorable to Cuba, such as good prices for sugar exports and relatively low prices for the importation of petroleum supplies. There were negative aspects of this relation, such as the tendency for the Cuban system to tolerate inefficient and costly productive practices and a tendency toward bureaucratism and dogmatism. However, the period of 1970-85 was a time of substantial improvements in the protection of the social and economic rights of the people as well as consolidation of the revolutionary process. Cuban scholar José Bell Lara writes that in the thirty years from 1959 to 1989, Cuba achieved levels in the principal living standard and quality of life indicators that were superior to those of Latin American and underdeveloped countries and similar to those of the most industrialized countries of the capitalist system.

The Revolution had eliminated illiteracy in the early 1960s. In 1961, it launched a literacy campaign, in which 271,000 people, including many student volunteers and professional teachers, were organized into instructional brigades. Some were dispatched to live for a time in rural areas. By 1962, the illiteracy rate had been reduced to 4%; by the end of the decade, illiteracy been completely eradicated.

During the first three decades of the Revolution, there were important gains in education. In 1953, some 56% of children aged six to twelve were enrolled in school; this percentage rose to 88% by 1970 and 100% by 1986. University enrollments increased tenfold, and the number of university centers increased from three in 1959 to forty in the 1980s. Because of the revolution’s commitment to economic development based in scientific development, enrollments in education, natural sciences, medicine, engineering, architecture, and agricultural sciences increased, while enrollments in the humanities, social sciences and law declined.

Malnutrition was eliminated, as a result of a rationing program that guaranteed to every Cuban family at least a minimal diet. By the early 1980s, the Cuban daily per capita calorie intake was 2,705, above the generally accepted minimum daily requirement of 2,500 calories.

And there were important gains in the development of a health care system. The doctor/population ratio declined from one doctor per 1000 people prior to the revolution to one doctor per 490 people by 1984. The infant mortality rate declined from 32.3 in 1953 to 16 in 1984. And having eliminated many communicable diseases that afflict underdeveloped countries, the leading causes of death in Cuba became heart disease, cancer and stroke, as in the developed countries.

The period of the 1970s and 1980s also was characterized by the institutionalization through a new Constitution of the structures of popular participation that were established by the Revolution in the 1960s as “direct democracy” in the form of mass assemblies and mass organizations. The Constitution of 1976 was approved in referendum by 95.7% of the people aged 16 or older. It established 169 municipal assemblies, elected by the people in secret, direct voting, in which voters choose from two or more candidates that have been placed on the ballot as a result of a series of neighborhood nomination assemblies. The delegates of the municipal assemblies elect the deputies of the National Assembly of People’s Power. Candidacy commissions, constituted by representatives of mass organizations of workers, farmers, women, students, and neighborhoods, play a central role in the election of deputies of the National Assembly, proposing lists of candidates to the delegates of the municipal assemblies. In establishing this political structure, the Constitution of 1976 eliminated electoral political parties and established the National Assembly as the highest authority, above the executive and judicial branches of the government. The Constitution named the Communist Party of Cuba as the guiding force of the Revolution, but without authority to nominate candidates or enact laws.

There also were significant gains in scientific development, in accordance with Fidel’s famous 1960 address to the Cuban scientific community, in which he declared a vision for economic development based on scientific development. In the period 1962 to 1973, fifty-three research institutions in the natural sciences, medicine, technology, agricultural sciences, and social sciences were created. By 1974, the total number of workers in science and technology had reached more than seventeen thousand. In that year, the formulation of a national scientific policy was initiated, which was oriented to the rapid application of research results to production and services. During the 1980s, this model of the unity of research and production led to important results in biotechnology. The Center for Biological Research, established in 1982, the Center for Genetic Engineering and Biotechnology, created in 1986, and other entities of research and development in biomedical high technology forged a pharmaceutical industry that supplied the needs of the Cuban system of public health and that commercialized some of its products internationally.

Thus, in the period of 1959 to 1989, the revolution was consolidated on an alternative structural foundation: a political process that ensured that political power would be in the hands of the delegates of the people, rather than representatives of the elite, thus ensuring that priority would be given to protecting the sovereignty of the nation against foreign capitalist penetration as well as to the satisfaction of the social and economic rights of the people to health, education, and basic human needs. At the same time, as a result of the exceptional understanding of world historical dynamics of the historic leader of the Revolution, the nation was guided by concept of economic development that stressed the development of human resources, in order to make possible scientific development integrated with national production of goods and services, thus providing the nation in a less disadvantaged role in the world-economy. These alternative structures provided the foundation for enabling Cuba to respond to challenges that it would later confront, including the collapse of the Soviet Union, new forms of imperialism, and the Covid-19 pandemic.