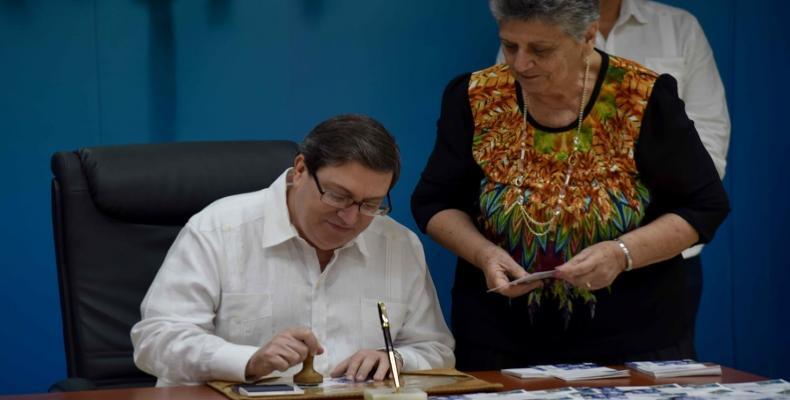 Havana, December 18 (RHC)-- Cuban Foreign Minister Bruno Rodríguez Parrilla canceled the commemorative stamp for the 60th Anniversary of the Ministry of Foreign Affairs (MINREX), in a ceremony held on Wednesday at the headquarters of that organization.

Wilfredo González Vidal, Deputy Minister of Communications, and Carlos Asencio Valerino, Director of the Cuban Postal Group, also participated in the cancellation of the special issue.

The chosen stamp was designed by José Antonio Medina and reproduced a photo of Fidel Castro during his speech at the United Nations on October 12, 1979, in his capacity as President of the Non-Aligned Movement.

Marcelino Medina Gonzalez, first deputy minister of MINREX, recalled that the ministry was founded on December 23, 1959, in the whirlwind of revolutionary changes and transformations that were indispensable to establish the foundations of a free country.

He recalled that by decree of the Revolutionary Government, the Ministry of State, a mimetic copy of the U.S. Department of State and obedient executor of telephone message diplomacy, was extinguished.

"It was not a simple change of name, but rather the obliteration of the nefarious heritage of that docile institution," he stressed.

From its very origins, he said, the revolutionary Foreign Ministry, with the guidance and vision of Fidel Castro, occupied its trenches in defense of the Homeland, forging itself in each battle until it became the diplomatic shield of the Revolution, as the Foreign Minister of Dignity, Raúl Roa, had declared.

Our ministry, Medina Gonzalez added,  always had the privilege of having our Commander in Chief, as a guide, architect, and conductor of foreign policy.

With his clear and universal thinking, his ethics, deep knowledge, sense of the historical moment, and tactical vision led us as a safe ship in the construction of the new Homeland that José Martí dreamed of.

In concluding, the vice minister said that the Cuban people owe to Fidel Castro "the place that Cuba occupies in the world, its prestige and authority since it was he who provided our foreign policy with those essential components of anti-imperialism, internationalism and solidarity, a genuine and independent policy, attached to the United Nations Charter and International Law."