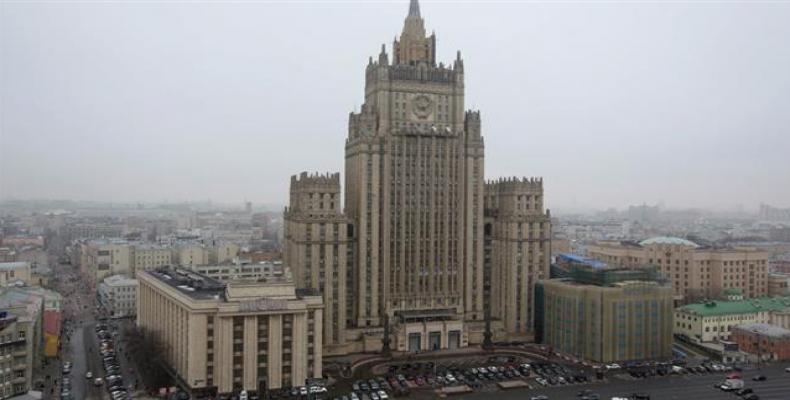 Moscow, August 8 (RHC)-- Russia says it was "deeply disappointed" by U.S. President Donald Trump's move to re-impose unilateral sanctions on Tehran, vowing to make its utmost efforts to save a landmark nuclear agreement Iran signed with the P5+1 group of countries in 2015.

"We are deeply disappointed by U.S. steps to re-impose its national sanctions against Iran," the Russian Foreign Ministry said in a statement on Tuesday.  The ministry said it will do "everything necessary" to save the historic nuclear deal, officially known as the Joint Comprehensive Plan of Action (JCPOA), and to protect its shared economic interests with Iran.  "This is a clear example of Washington violating UN Resolution 2231 and international law," it added.

In defiance of warnings from the European Union, the JCPOA signatories and many international players, President Trump signed an executive order re-imposing a first round of sanctions on Iran, which were lifted under the nuclear deal, to levy "maximum economic pressure" on the Islamic Republic.

U.S. President Donald Trump has signed an executive order reimposing many sanctions on Iran to levy "maximum economic pressure" on the Islamic Republic.  “[The Iran nuclear deal] a horrible, one-sided deal, failed to achieve the fundamental objective of blocking all paths to an Iranian nuclear bomb,” Trump said in a statement on Monday.

The sanctions will cover Iran’s purchases of dollars, its trade in gold and precious metals, and its automotive sector.  Further sanctions on oil and transactions with the central bank of Iran will come into effect on November 4th.

The Russian Foreign Ministry further said the multi-party nuclear agreement has "shown its effectiveness."  It added that the international community should not "allow such significant achievements in multilateral diplomacy to be sacrificed in the name of American aspirations to settle political scores with Iran."  The statement pointed out: "As long-term experience has shown, it will not be possible to gain concessions from Iran using pressure."

The European Union on Monday voiced its deep regret over the U.S. renewal of sanctions on Iran, saying the 28-nation bloc and other signatories would work on keeping financial channels with Iran open.  "The JCPOA is working and delivering on its goal, namely to ensure that the Iranian program remains exclusively peaceful, as confirmed by the International Atomic Energy Agency (IAEA) in 11 consecutive reports," the bloc said in a statement.

Syria also on Tuesday slammed the United States' re-imposition of sanctions on Iran, saying it was an "illegal" move driven by the "arrogance."  Syria "sharply condemned the Trump administration's decision to re-impose economic sanctions on Iran," the official Syrian Arab News Agency (SANA) quoted a Foreign Ministry official as saying.  "These unilateral actions are illegal under international law and confirm that the U.S. administration's policies have a proclivity for hegemony and arrogance," the Syrian official added.

The official expressed Syria's full solidarity with Iran "in facing the hostile policies of the U.S. administration" and added, "Iran's leadership, government, and people will triumph over all the ramifications of these steps."