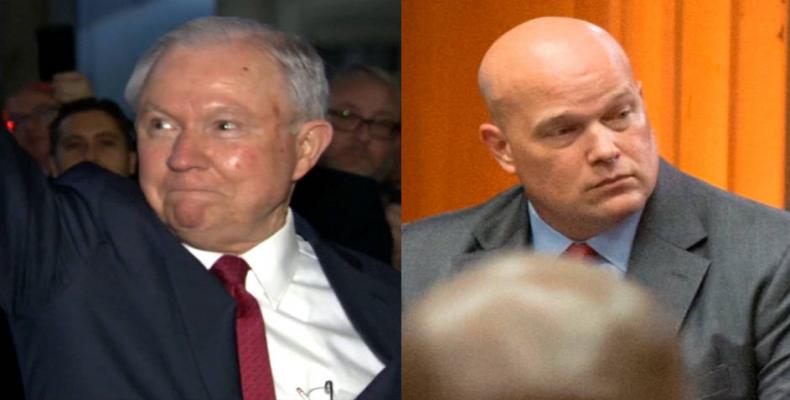 The new acting attorney general, Matthew Whitaker, is a former U.S. attorney who spent years working at the Foundation for Accountability and Civic Trust, which was funded in part by the Koch brothers.  He became Jeff Sessions’s chief of staff last year after he began speaking out against Mueller’s probe.

In a statement, the American Civil Liberties Union, the ACLU, said: “Jeff Sessions was the worst attorney general in modern American history.  Period. But the dismissal of the nation’s top law enforcement official shouldn’t be based on political motives.”

The announcement has prompted major questions about the future of the Russia investigation and whether Trump will target Mueller next.  Trump had repeatedly and openly attacked Sessions for recusing himself from the Mueller investigation.  Some experts are raising questions about the legality of putting Whitaker in charge rather than the department’s number two, Deputy Attorney General Rod Rosenstein, who had been overseeing the Russia probe.

Democratic leaders Nancy Pelosi and Chuck Schumer both called for Whitaker’s recusal from the Mueller probe.  In an interview with CNN last year, Whitaker speculated about Sessions being replaced and funding to the Mueller investigation being withdrawn.

Trump’s naming of Matthew Whitaker as acting attorney general also raises the possibility the Department of Justice will go after Hillary Clinton.  In 2016, Whitaker wrote an op-ed for USA Today in which he wrote he would have indicted Hillary Clinton, writing the ”FBI director’s judgment was that 'no reasonable prosecutor' would bring the case.  I disagree.”