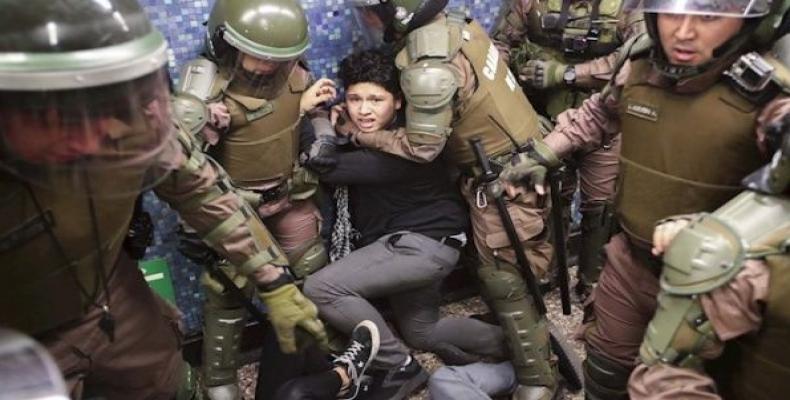 Santiago de Chile, October 19 (RHC)-- The latest price increase for tickets of Chile's Santiago Metro this week triggered a wave of protests in several suburban stations, with hundreds of young people who sneak in without paying, cause damage and then face the police.

For the fifth consecutive day on Friday, there were incidents in dozens of metro stations in the Chilean capital, where the police presence has increased over the past several days with the intensity of the protests.

Chilean President Sebastian Piñera declared a state of emergency for the provinces of Santiago and Chacabuco early Saturday morning after protesters started fires at subway stations around the capital during the night.

The tensest situation was experienced at the Los Héroes station, in the heart of the city, where a group of young people faced riot police officers in the area where the machines are to validate the tickets and access the platforms.

The protesters are mainly high school and university students, although other people have joined the call to evade the payment of the ticket, which is worth 830 pesos (about $1.20 U$D) in rush hour.

The majority of the mobilizations of rejection to the rise of the tickets have consisted of massive evasions and to raise the screens of payment so that the passengers enter the platforms without paying.  In some cases, however, acts of vandalism were recorded and the young people were seen breaking access doors to the stations, glass and equipment.

The police, meanwhile, have acted forcefully to stop protesters and used tear gas inside stations and even in some subway cars.  The Chilean Government has strongly condemned the incidents and has promised a hard hand with those responsible.

The trigger for the protests was the 30 pesos increase in the price of the subway tickets decreed two weeks ago.

The outrage of the users increased with the statements of the Minister of Economy, Juan Andrés Fontaine, who urged passengers to get up early to take advantage of the low fare between 6 and 7 in the morning.

Metro de Santiago is a private company in whose ownership the Chilean State participates, and the price of the tickets is set by an expert panel based on several indicators, such as inflation, the cost of supplies for its operation and the exchange rate, among others