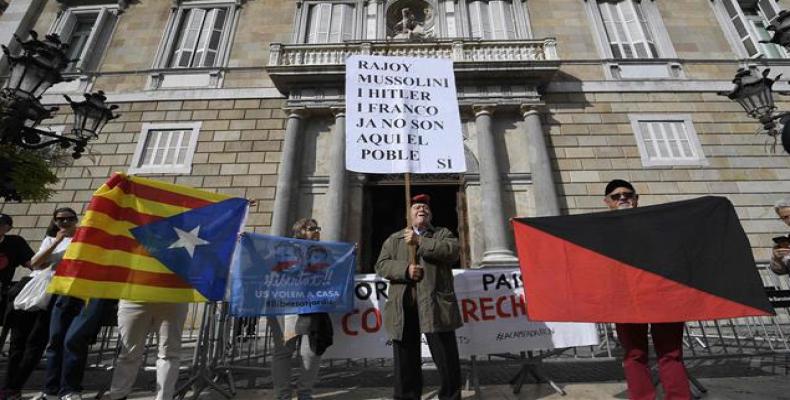 Madrid, November 27 (RHC)-- More than 200,000 Spaniards have signed a petition filed in parliament asking the government to ban the National Francisco Franco Foundation (FNFF), which glorifies Spain's former dictator.  "In Germany or in Italy, it would be unthinkable to have a Hitler Foundation or a Mussolini Foundation," read the petition, filed by a group that included descendants of victims of the Franco regime, in power from 1939 to 1975.

Nearly 219,000 people signed the petition, which wants a law prohibiting an entity that glorifies a dictatorship and its crimes from obtaining the status of a foundation.  "It's beyond understanding that a democratic state allows such an organization to be a foundation meant to accomplish work of general interest," said Emilio Silva, founder of the Association for the Recovery of Historical Memory.

"It's a way of collaborating with its objectives," added Silva, whose group seeks justice for victims of the 1936-1939 civil war and Franco's ensuing dictatorship.  On its website, the FNFF criticizes "attacks" against the foundation.  The petition argues that while Hitler committed suicide and Mussolini was murdered as World War II was ending in 1945, Franco carried on for 30 more years, until he died at the age of 82.  He had taken power after a civil war he won with the help of the Axis leaders.

The Franco Foundation, whose honorary president is his 91-year-old daughter, actively defends the dictator's "work."  In October, after a complaint by the foundation, a court suspended plans by Madrid's city hall to change the name of streets and squares that pay tribute to heroes of Franco's dictatorship, such as the Blue Division, a military unit that fought for the Nazis.

But the newly-filed petition will remain symbolic for now, as it does not reach the minimum of 500,000 signatures required for the lower house to consider drafting a bill.